What is a Dead Man Switch?

The origin of the dead man switch

A dead man switch is a mechanism that is designed to be activated when a human operator or owner becomes incapacitated through death or loss of  consciousness.

Originally, it was only applied to vehicles or machines. They were used to verify if the operator was still there and actively operating the device.

Later it started to be used for other purposes, such as computer software.

Nowadays, it is also used in decentralized smart contract based technology such as Inheriti®.

Software versions of a dead man switch are generally used by people with technical expertise and for several purposes.

Think about sending a notification to friends and family, or deleting and encrypting the data.

The “non-event” which triggers this kind of event can be all kinds of things:

Modern versions commonly use automated email, though newer solutions, such as smartphone apps, often use push notifications which are sent to the owner’s mobile device.

The use case in a digital inheritance plan

Dead man switches are also used in decentralized inheritance plans, such as in Inheriti®.

Before the dead man switch will come into play in a decentralized inheritance plan, the “initiator” (the owner of the plan) will have to perform a few steps to get their plan ready and activate it.

In the case of Safe Haven’s Inheriti®, these steps are:

When these steps are completed, the Inheriti® plan is activated and ready.

Benefits of the dead man switch

The owner of the plan can carry on with their activities. He will not have to worry about anything.v

The initiator does not have to do anything with it – unless they receive an unwanted validation message (while they are still alive).

The dead man switch merely validates if the owner is in any capacity to respond to emails or other messages when the Merge Authority triggers it.

The power of decentralization

Safe Haven’s Inheriti is the only real decentralized inheritance solution that uses a dead man switch.

Initiators can enter their most valuable data into a decentralized inheritance plan. They can be certain that it will remain encrypted and private for the rest of their lives.

The Dead Man Switch was specifically made for that!

When the initiator of the plan passes away or becomes incapable of responding, it is time for the dead man switch to do its work.

All beneficiaries must come together physically to enter their SafeKeys into the computer used by the Merge Authority.

When the beneficiaries bring their shares together, the decentralized inheritance plan triggers the Dead Man Switch.

This will verify if the owner of the plan is still alive or not. The validation process happens by sending automated text messages, emails or push notifications to his/her mobile device.

If the owner of the plan does not respond or take action on these messages, and a certain time period has passed, their lack of action will be considered a continuous non-event, and validation will happen.

This will cause the release of the on-chain share (on the blockchain) of the decentralized inheritance plan.

With the dead man switch validated, the decentralized inheritance plan can proceed to the next step.

After the dead man switch has done its work, the beneficiaries and merge authority will need to work together one more time to enter all SafeKeys into the computer again.

This time, the backup share on the blockchain will be released as well.

The Dead Man Switch used in Safe Haven’s Inheriti® is unique in crypto, and is guaranteed to work without failure.

This is the perfect solution for every person who holds cryptocurrencies or NFTs and wants to pass on their assets to the people who matter to them in a safe, secure and truly decentralized way.

An Inheriti® decentralized inheritance plan is the perfect solution for making your crypto inheritable.

Click here to learn more about our patented solution: Inheriti® » 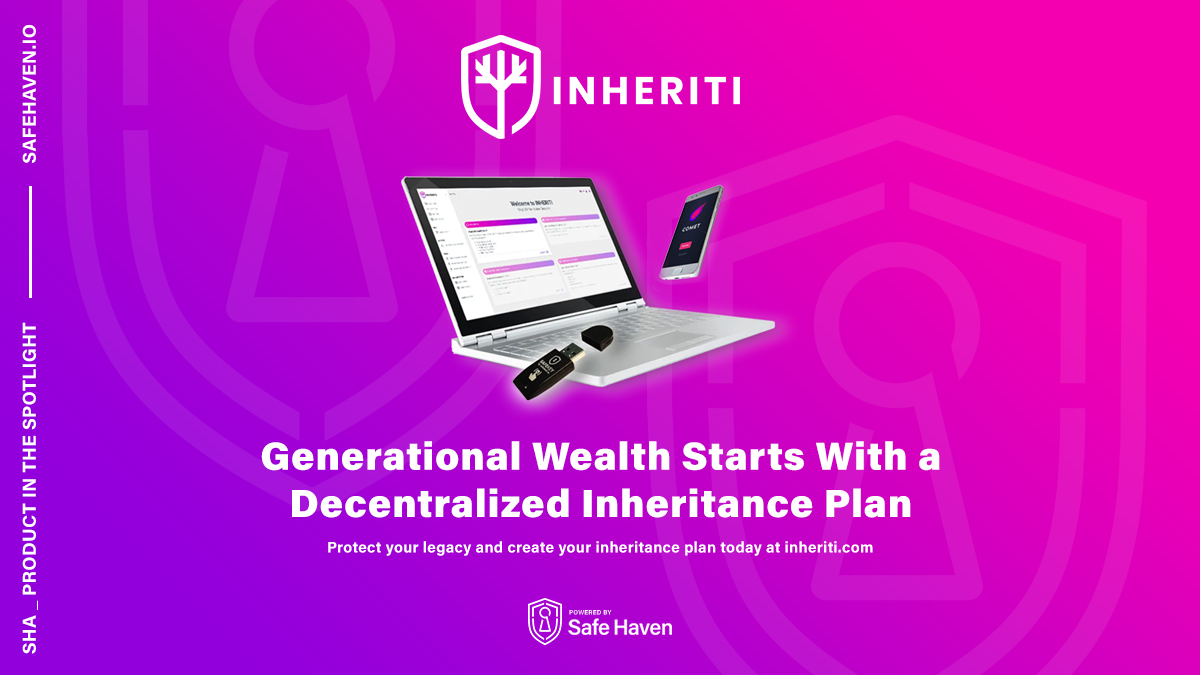