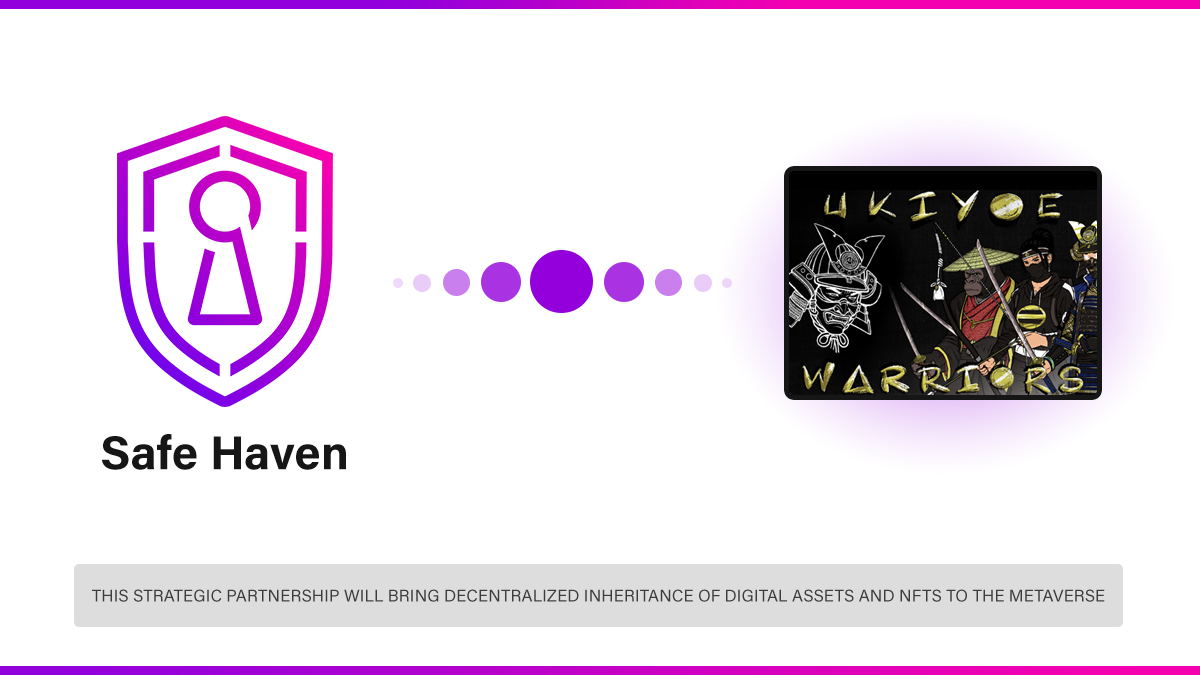 The partnership between Safe Haven and Ukiyoe Warriors began through a collaboration within the first NFT collection, announced on January 24th of 2022, which included an Inheriti® integration with their organization; all NFT holders of Ukiyoe Warriors will be able to establish a decentralized inheritance plan, via referral link, and opt to donate 5% of their service fee to UW’s foundation wallet.

We are excited to announce our second collaboration with @Airworthy_UW, founder and CEO of #UkiyoeWarriors — @Inheriti_com integration and partnership included!

25 #SHAman Ukiyoe Warriors were added into the #NFTCollection and 4,000 $SHA will be airdropped to the lucky minters‼️ pic.twitter.com/FBKwZtoB7s

What is the Cost to Utilize Inheriti® Services and Why is it Important?

Users can create a lifetime decentralized personal backup and/or inheritance plan for the cost of 10k SHA tokens; without decentralized recovery protocols, all NFTs and cryptocurrency would become lost forever if owner of estate loses access to wallet storing said tokens – Inheriti® reduces the risk of losing utility tokens and NFTs within metaverses, or any other ecosystem utilizing digital assets to function, enabling investors to feel more confident about the survival of their investments.

When will the Inheriti® Integration be Implemented and How will the Button be Displayed?

In the month of March, Safe Haven will be integrating all current partnership links that have not yet been added to the platform. Now that the Ukiyoe Warriors website has launched, the integration link will be added to a descriptive Inheriti® section on their platform after minting; when the Inheriti® integration goes live, clients creating plans will be able to select ‘Ukiyoe Warriors’ within the Inheriti® Referral section of our decentralized platform.

How Large is the Ukiyoe Warriors Network?

At current time of writing this article, there are around 700 community members in the Ukiyoe Warriors discord group, hundreds of supporters within Airworthy’s Saike Monsters NFT collection, and thousands of loyal VeFam community members that support the music NFT collaborations curated with DJ Burns for numerous Vechain projects. How Many NFTs are Available, within the First Collection, on February 28th?

The first Ukiyoe Warriors collection is composed of 3,777 hand drawn NFTs, some of which are holding the legendary SHAman Bow, while others have different weaponry or armor for attributes. The rarest type of warrior would be the Ronin, which are limited to 4 editions, while the other three types of warriors are the Apes, Samurai (male humans), and Musha (female humans) warriors. What is the Minting Price?

It only costs 1,000 VET tokens to mint a Ukiyoe Warrior!

What is the SHAman Bow and Why is it Special?

On January 24th, Safe Haven and Tyler Doussan (CPO) collaborated with Ukiyoe Warriors to reward 4,000 $SHA tokens to those who mint one of the twenty-five SHAman Bow NFT editions at launch – the Foundation and Tyler are both donating 50k $SHA tokens. Not only is this attribute extremely rare, but it will also have future utility within Safe Haven’s product ecosystem, which includes a whitelisting position and NFT airdrop from Safe Haven’s official NFT collection launching in quarter two of 2022! Special Thanks to Ukiyoe Warriors for Implementing $SHA Token Utility within Secondary Sales of NFTs!

In the most recent article, published by Ukiyoe Warriors, it was announced that 3 lucky NFT holders of the collection will be airdropped 30% of the secondary sales linked to the after-market exchange – payouts will alternate between $SHA and $WOV tokens each period, which will establish a bi-weekly airdrop of $SHA or $WOV to three random Ukiyoe Warrior NFT holders! Read this article to better understand the upcoming NFT launch of Ukiyoe Warriors, such as other unique prizes linked to specific NFT editions within the collection: https://medium.com/@airworthynft/ukiyoe-warriors-clan-banner-set-bonuses-79d59c2a53c5

Join the Community in Spreading Awareness

As always, all of us at Safe Haven want to thank our community for your continued support.